HighStakesDB opened an access to graphs of all online high rollers New Year holidays came a little bit earlier for poker players as in the biggest high stakes database HighStakesDB opened a public access to closed-before accounts of the highrollers on some unknown reason in the middle of December. Now we all know how much really did Red baron, Alexander Kostritsyn, Ragen70, Ben Tolleren, Nanonoko and many other top pros earn.

HighStakesDB shattered pink glasses of many. The website suddenly decided to open the graphs of the players to the public eyes, though no permission was granted to them. Still, we have an opportunity to know how much did the most famous online players earn this year and throughout their careers.

To begin with, we can have a look at the video of Douglas Polk on this:

By the way, Polk was mentioned many times on the pages of this blog and in most cases he was some sort of an expert on high stakes online. How much did he earn himself? 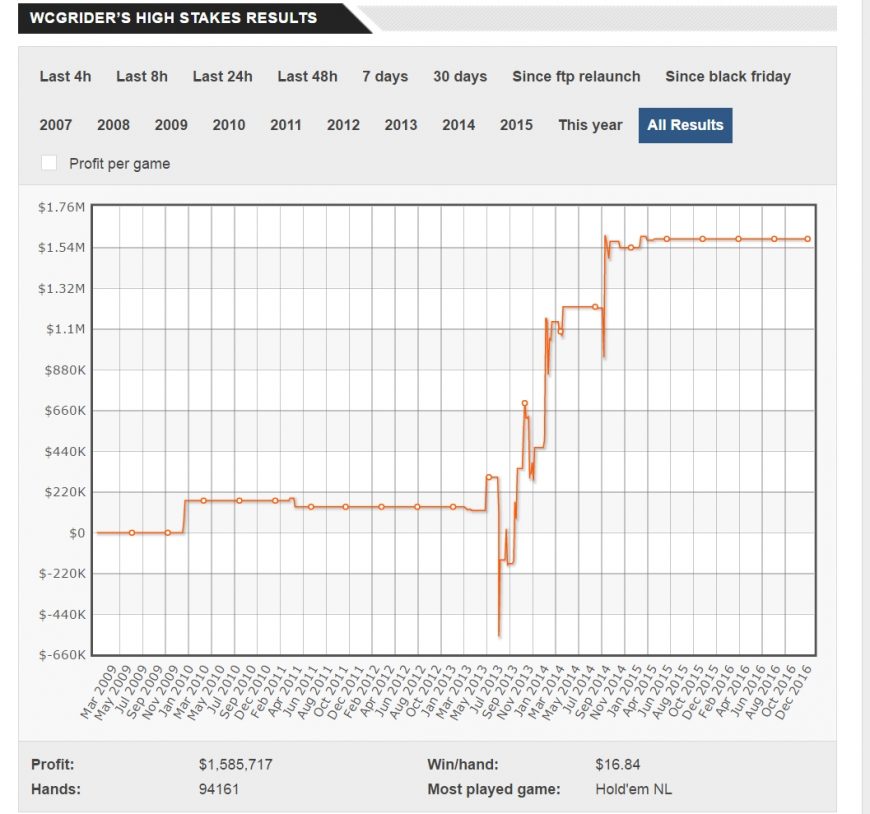 Let’s move on. Whose numbers are we going to check out first? The numbers of Red Baron of course, who is currently the best 6-max Hold’em player of the world: 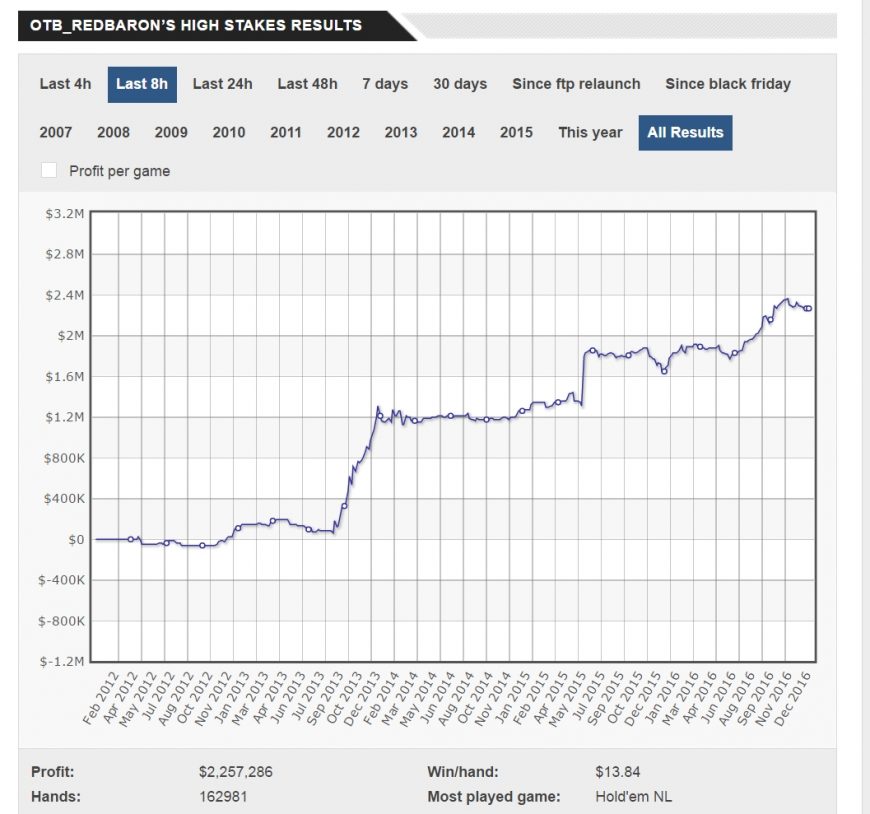 He earned a little over $2.2 million on PokerStars with very smooth graph for a player of this level – without significant downstreaks. Naturally, this is only one room and the stakes below $25/50 aren’t taken into considerations. This is relevant for all the players, not just for Red Baron and the rest of the players in this article.

Randy “nanonoko” Lew has a rather curious graph. He has always been an example of a successful grinder of middle stakes. It is probably so as he lost almost $200,000 playing at $25/50 and higher. 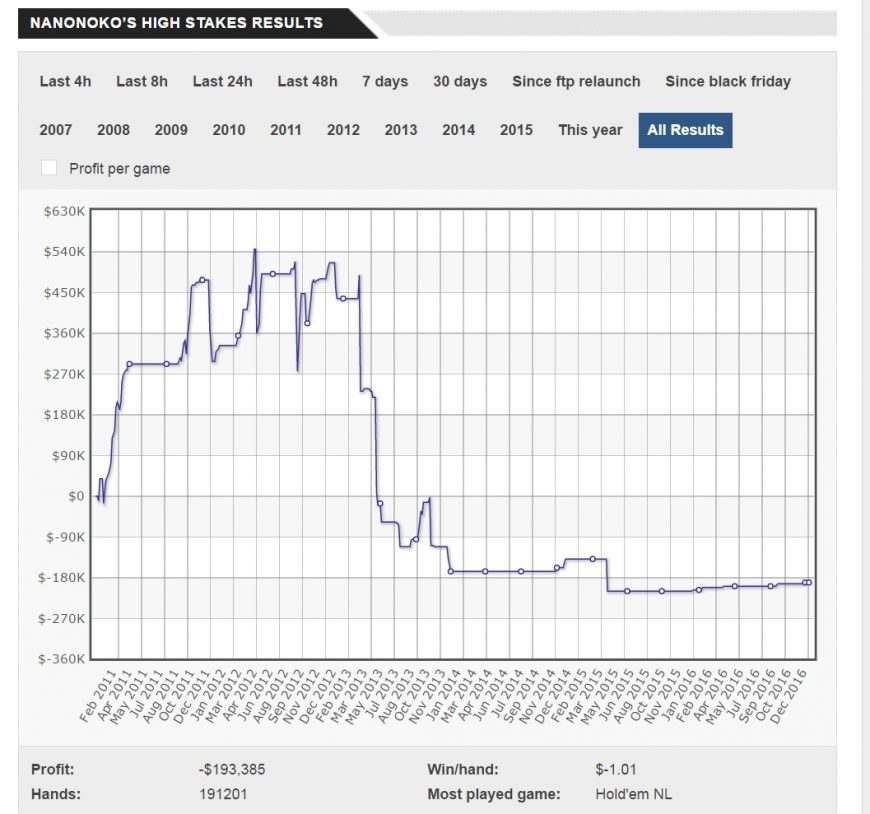 The most successful online highrollers

Let’s have a look at the graphs of other top players. During the latest years, the situation could have changed drastically. Few years ago all the graphs at HighStakesDB were public and after the Black Friday an opportunity to hide them from other people’s sight appeared.

Now we can see all again.

For instance, German Niklas Heineker. This is one of the loudest stories in online poker. He walked off on the top of his fame. He disappeared, vanished after earning millions. How much exactly? Here are the graphs: 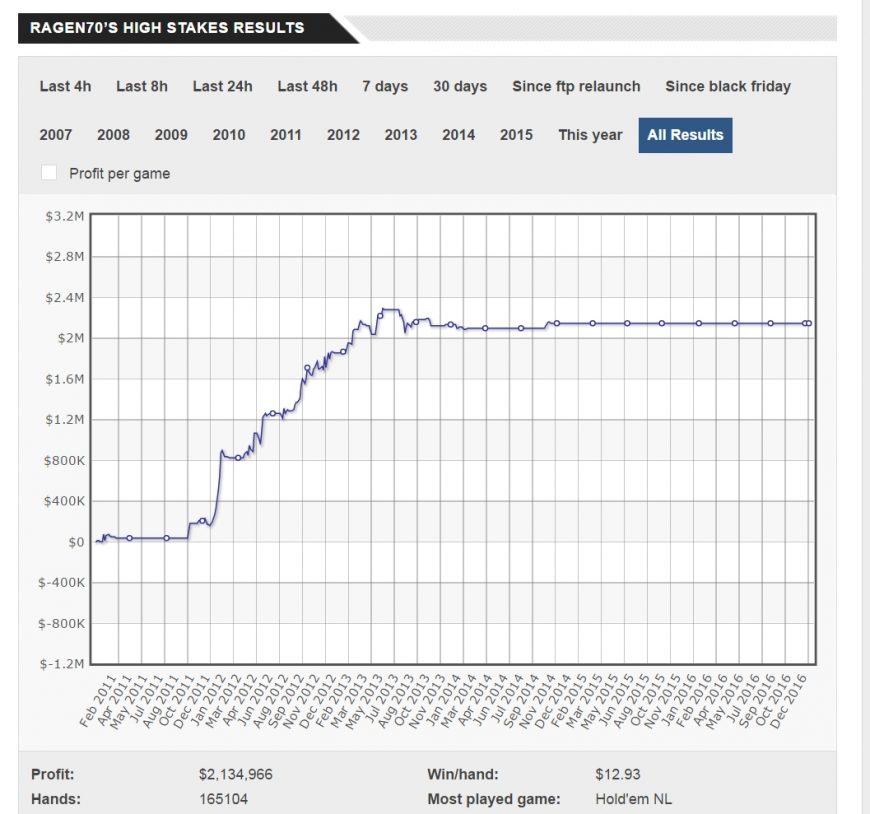 Do you want to know who’ve earned the most at PokerStars throughout these years. You’ve probably never heard of the guy - Jens Kyllonen aka jeans89: His profit is over $5.2 million and this money is entirely won in Pot-Limit Omaha. Kyllonen is, probable the only players in the world, who was ballsy enough to make one million buy-in to Big One for One Drop from his own pocket.That was really risky. Unfortunately, Jens didin’t in, but it was worth a shot.

How much did the most successful Russian highroller - Alexander Kostritsyn – make? He is actually not that far behind Kyllonen at PokerStars with net profit of around $9,000,000: 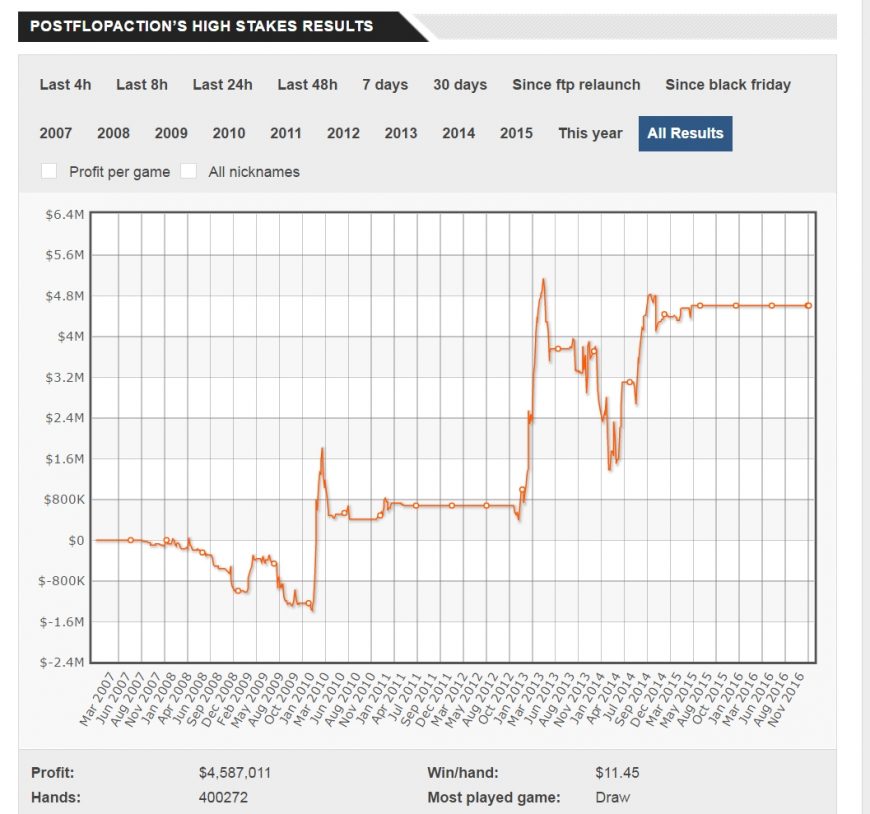 Here is the graph of Forhayley, another incredibly successful Russian-speaking player who prefers to stay in the shadows: Anyone else worth mentioning? There are many decent players and one of the most decent is Ben Tolleren, here is his Full Tilt graph: 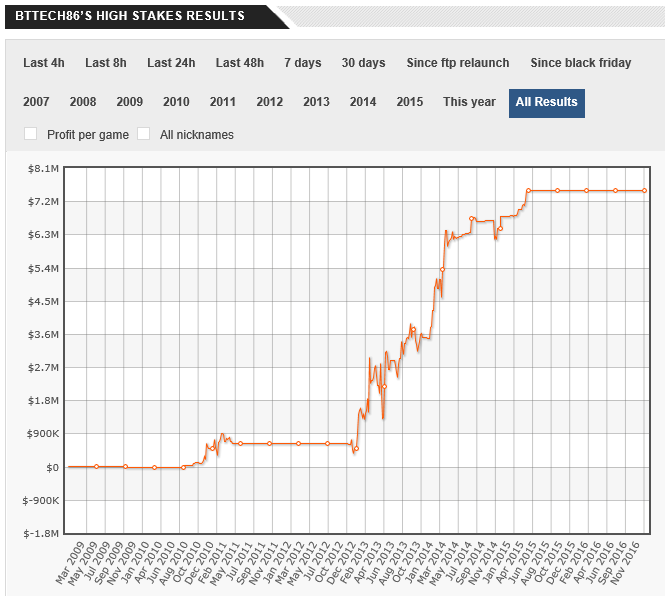 Another question relevant to many: Feruell’s profit at PokerStars.

The answer is below: Gus Hansen is the one who loses the most, as we know. His graph wasn’t some sort of secret ever (nothing to hide) – well, he lost couple of tens of millions… 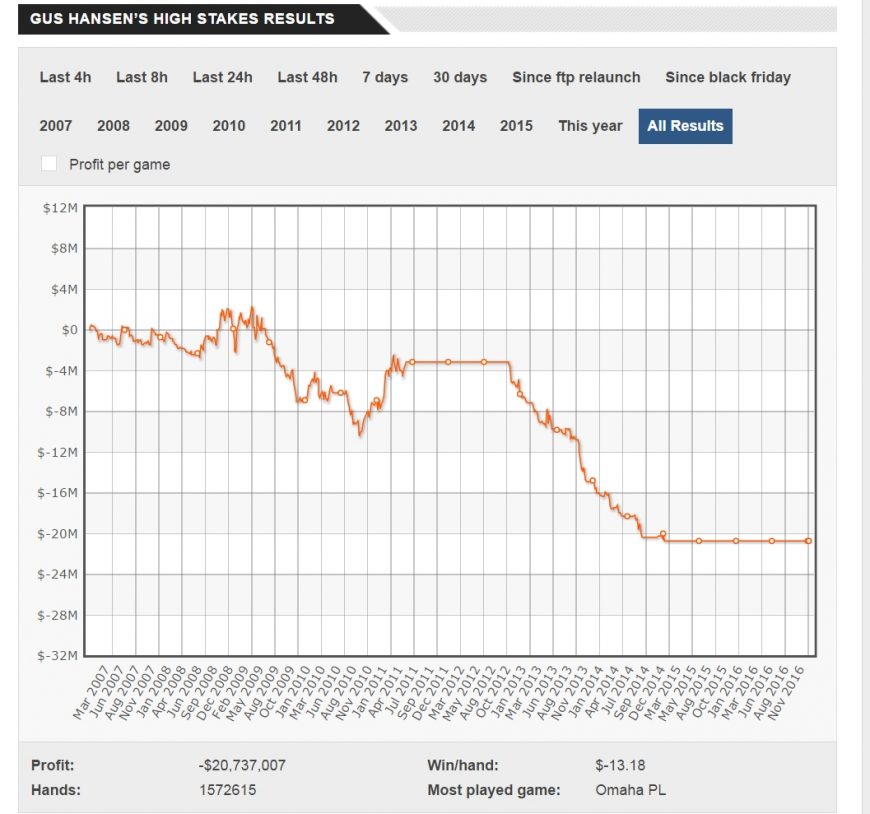 One of the most horrific graphs belongs to the PLO regular WithColor. It’s fearless to look at it: 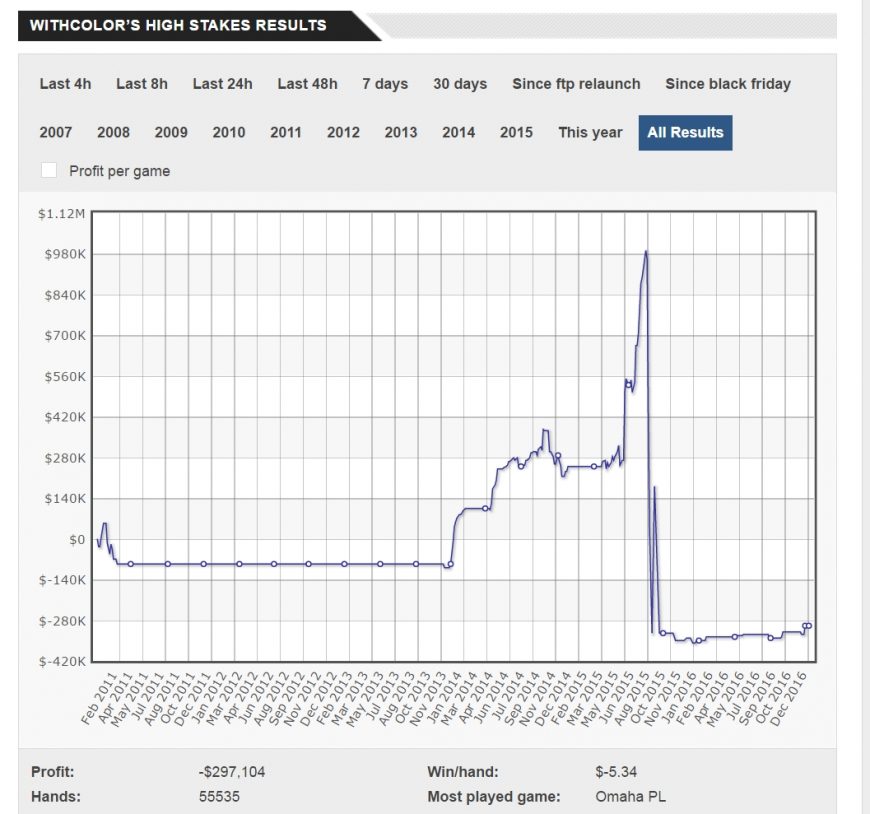 There is one more famous character – SamRostan. He lost this much on Full Tilt: Another example – bodamos. The fella has amazing winrate of almost -$100 per hand, the graph in result looks like this. Have a look at your favorite players’ graphs on the web sites. That helps losing some illusions.