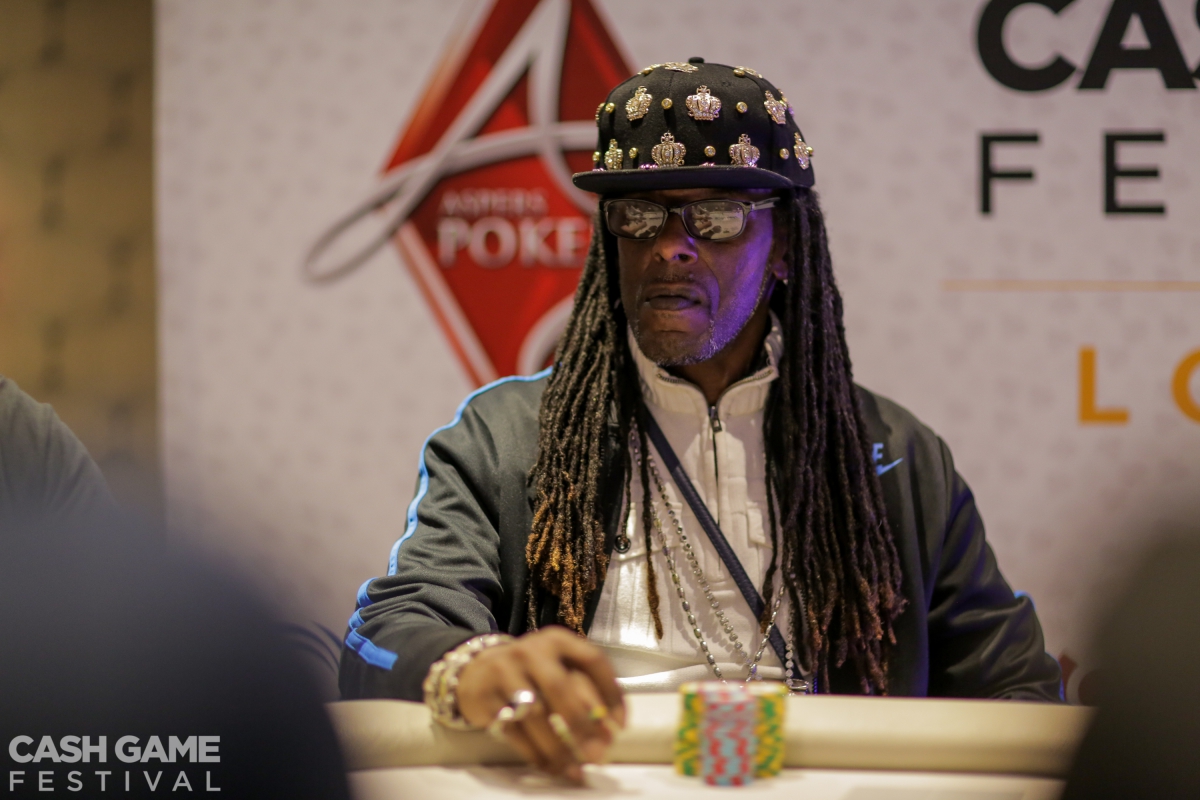 Cash festival format, unlike traditional tournament series – was always in minority. Poker tour stops are always provided with cash games, but the tournaments are always in the center of attention. It turned upside down recently.

Cash Game Festival – this is a simple name for cash festival, which started several years ago in Estonia. The festival specializes exclusively on cash games and has stops already in Bulgaria, UK, and Malta. In November, it will have the biggest stop in the capital of Estonia Tallinn.

Here is how the guys represent themselves on the official website:

“Our international tour began in London, in Aspers Casino, then we’ve been on Malta, Casino Malta; the third stop took place on Sunny beach, Bulgaria, at Platinum Casino. In September we had another festival in London, then was the time for the most grand event of the year - Cash Game Festival Tallin!”.

Why Tallinn, not something else?

Poker law system in Northern countries - Sweden, Norway, Finland and so on – gets in the way of the biggest offline events. The state is a monopolist in these countries, all the casinos belong to one or two organizations.

Estonian market is an absolutely free, gambling facilities get licensed, there is healthy competition. Therefore, various events of different levels can be held here. Many “Scandinavian” poker series take place in Tallinn (particularly, in Olympic Casino) – even if they are just for players from Sweden (Swedish Championship) and from Finland (Pokerfinnkampen). And especially if they are oriented on everyone else (Unibet Open).

Every stop usually lasts about five games with cash games happening all the time. More than 25 tables were active simultaneously in London during the first festival. The stakes varied – from £1/£1 to £25/£50. The pots of several tens thousand euros or pounds weren’t rare.

The most interesting part is that Cash Game Festival actively promotes its Twitch-channel and makes the coverage with cards open, the quality of it is high, by the way. There is 4 twitchers every hour from 6PM till 10PM UK Time. And 10PM UK Time starts the Feature Table, it is like the TV table in live events, where 6 streamers will battle against each other, then viewers have to join www.twitch.tv/cashgamefestival and see the whole action.

Every night from Monday to Friday, 6 twitch users are battling in that Feature table, from each night, after 3 hours, biggest winner will get a spot on Saturdays final table. And saturday, the winner of the final table, will get a 2k€ Package to CGF Tallinn.

Not only the most expensive stakes but all the rest as well are presented there. By the way, among poker variations aren’t just Hold’em and Omaha, but 6+ Hold’em, Chinese poker, Dealer’s choice, and Sviten special (the game popular in Finland). 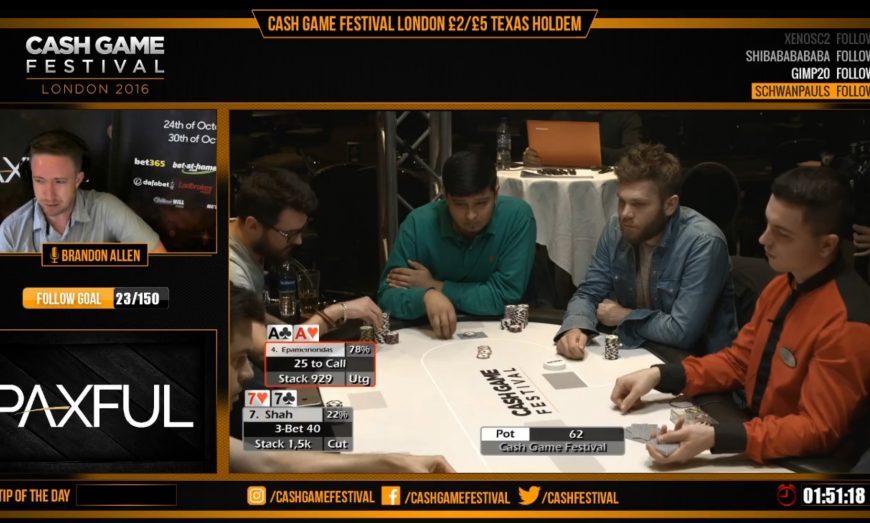 Today (October, 24) and the rest of the week online version of the festival will take place for the first time. The partner is iPoker. Everything will happen at poker rooms of this network.

Online festival looks like a big promo for live events, but it is special in a way. By the way, more than 30 streamers will play in poker rooms and broadcast it for the viewers. €2,000 packages for the upcoming event in Tallinn will be played out. 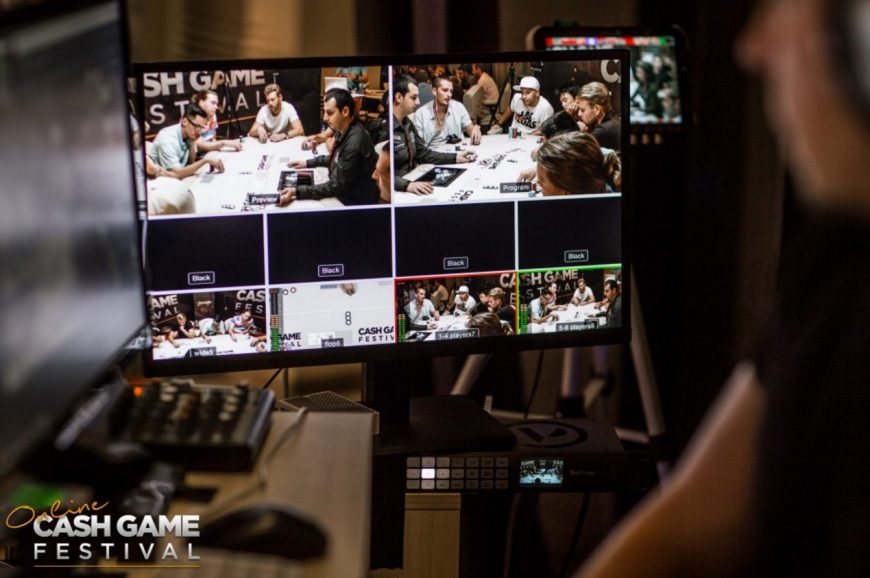 Cash Game Festival positions itself like a poker vacation – it is not just game but also a holiday with friends and acquaintances. This is a certain trend, which formed not so long ago.  Many small and middle poker series follow this example, combining business with pleasure. They not only organize high-quality tournaments, they also make excursions, boat trips, trips to nightclubs parties and so on.

This principle also works in cash festival format. By the way, in London at CGF ping-pong championship took places, and the players liked it very much. It is just ping-pong, but it was very interesting to take part in this competition. Much better than some excursion and other entertaining events. 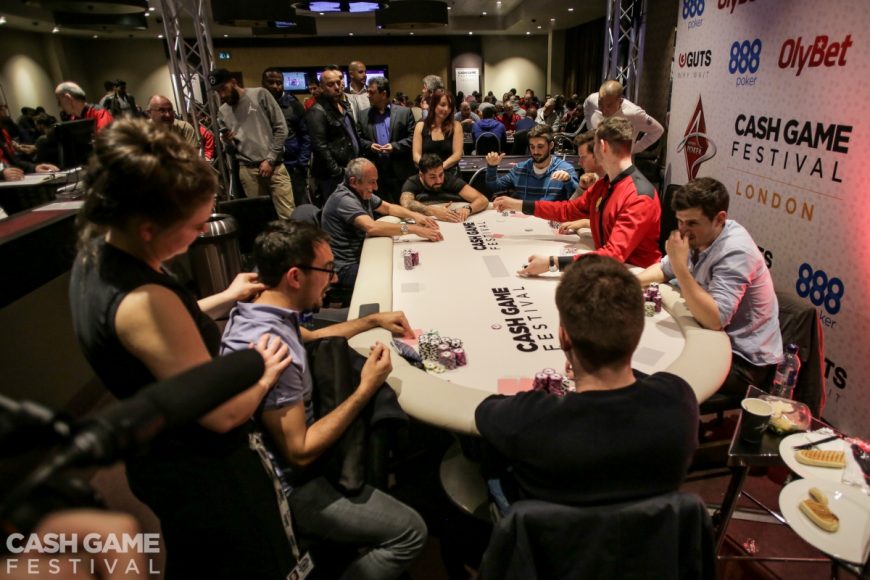 It is hard to say how this series may grow and whether it might be a new trend. Cash festivals of the local level happen all the time. For instance, another Zeus Cash Festival will happen in Minsk.

It is simpler to make hype around yourself for the tournament series, especially if the main event champion is recreational player. It is much harder to think of a catchy slogan for cash festivals. This is what stays in the way of development of this series.

All poker clubs in Estonia

All poker clubs in the UK